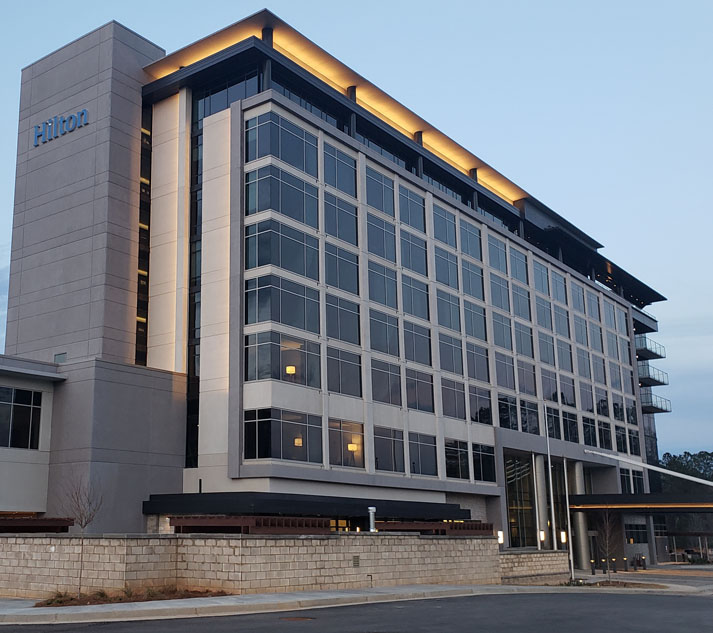 With some modifications, the 249-room, eight-story hotel is based on the full-service prototype Hilton Hotel the team built a couple years ago in Franklin, Tenn. The team — Chartwell Hospitality, Rabun Architects, The W Group interior design, Crain Construction and 50 percent of the subcontractors – was the same for both projects.

The Alpharetta hotel site was pad ready when Crain Construction took over the project as general contractor in May 2019. But several months into the job, work was paused to investigate and correct substandard soil causing building issues. Instead of stopping the entire project for two and a half months while the soil issue was resolved, the team tried to keep everything moving as much as possible.

“Framing, electrical and plumbing kept marching on as we tried to mitigate the impact of stoppage on the project,” said James Williams, Crain Construction project manager.

With the investigation completed, low-mobility grouting was installed to prevent the substandard soil from further affecting the building. That allowed the construction team to proceed on the critical path of installing precast veneer.

The project hit another setback when the first COVID-19 case stopped work for 10 days. Handwashing stations were built and set up throughout the worksite and mandatory face mask use was implement for the 150-175 workers onsite. High touchpoint areas (handrails, hoists, grabrails, equipment, portable toilets, etc.) were cleaned every night.

“We managed to keep everyone on an even keel by being ultra-transparent and communicating frequently,” said Williams. “With the fluidity of coronavirus information coming from the federal level, we met virtually with 15 subcontractor companies four or five times a week to keep everyone informed and working off the page.”

Materials were also delayed due to the coronavirus. Italian floor tile for the guest rooms and public spaces took eight months to arrive, instead of the normal six months. Furniture shipped from China was on the water for 14 weeks, instead of eight. Delays forced changes to the interior design and had the team hunting throughout the U.S. for other available materials.

“The project required extreme planning and forced us to be more flexible across the board,” said Williams. “We learned to adapt and change the way we normally do things.”

Despite the multiple challenges, Williams and his team remained client focused and kept the project moving. The 178,000-square-foot Hilton Alpharetta opened for guests in mid-March 2021. Crain Construction’s open and ongoing communication and team dedication earned high praise from hotel leadership.

“This has been a fun project and as excited as I am to get this hotel open, I am sad to see the construction phase ending,” said Tim Zuggar, general manager Hilton Alpharetta Atlanta- Chartwell Hospitality. “I have really enjoyed working with you and your team. You are a professional and I value the friendship we have developed.” 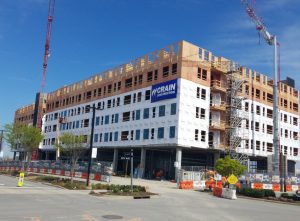 How Our Core Values Inform Every Project

Everyone knows that a building is only as strong as its foundation. Below each skyscraper needs to be a foundation that’s strong enough to support it. Before ever building up, construction teams must build down. We believe the same principle applies to our company. For Crain, our values are the foundation of our company. We... 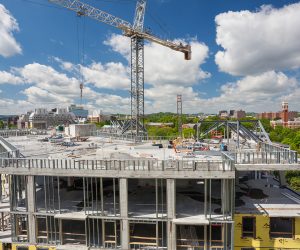 The COVID-19 pandemic sent shockwaves across the world. Nearly every individual, family, business, and industry was impacted in some way, shape, or form. While we worked diligently to care for our employees and clients during the initial days of the pandemic, no one could anticipate the long-term effects the pandemic would have on industries like... 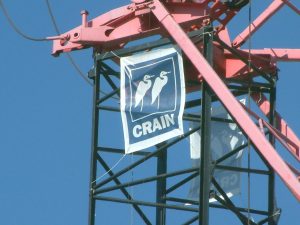 Considering a Job in Construction? Here's What it’s Like to Work at Crain

Are you interested in joining our team? Please reach out to start the conversation! Commercial construction is a growing industry with a vibrant workforce with over 10 million employees in the US alone. As a result of the growth in our industry, there is incredible potential if you’re looking for a job in construction. Working... 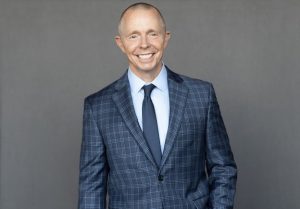 The skyline of Nashville continues to change, but among the crowd of cranes and new buildings remains a familiar fixture. Founded in 1933, Crain Construction has executed hundreds of projects across Music City. At the heart of the company, it’s not the projects or profit that continue propelling business, but the people you’ll find at...